Good week, though because I am so burned out I am not thinking as clearly as I could be (my usual limitations aside). But I am learning, and feel the project has progressed.

Before arrival we played with stepper and servos at a really basic level, and I was happy to adapt a lampshade for a basic spinning uncontrolled ecliptic. 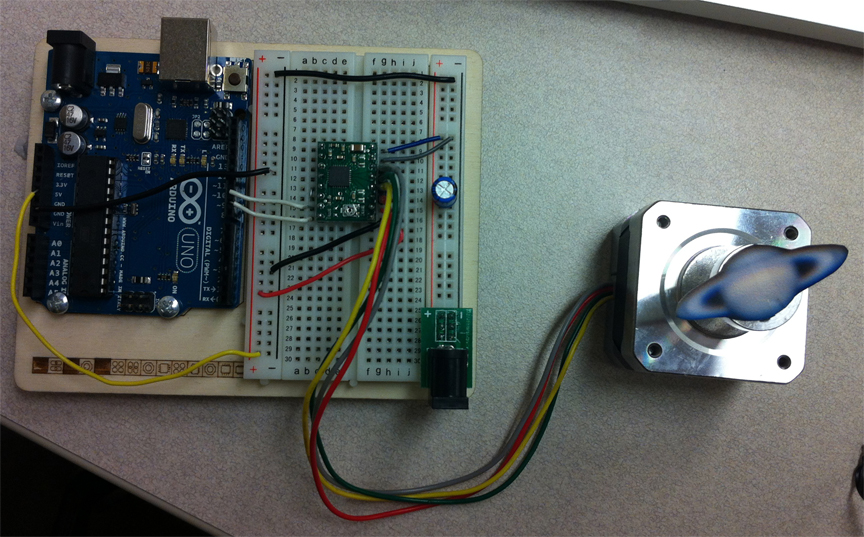 spinning stepper with flat vinyl saturn as per Lague 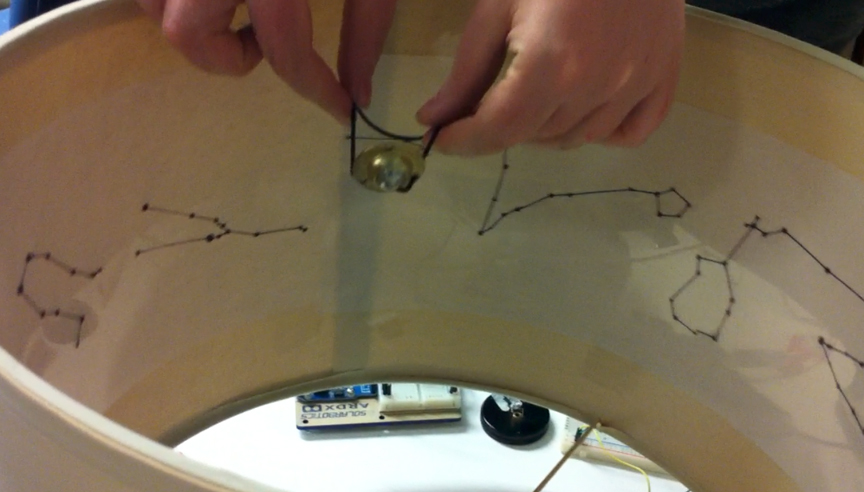 spinning flat projection on lampshade, with metal caster standing in for planet

Rob arrived on Monday and after some close-working lessons in Arduino code and cosmic motions we basically set to separate tasks. He worked on a prototype using a stepper with the Pololu motor driver A4988 (the one I soldered pins to and used for the lampshade spinner) to control the rotation of an adapted flat planisphere, and a stepper rigged to copper tube/piano wire to control the linear motion of the ‘planet’. 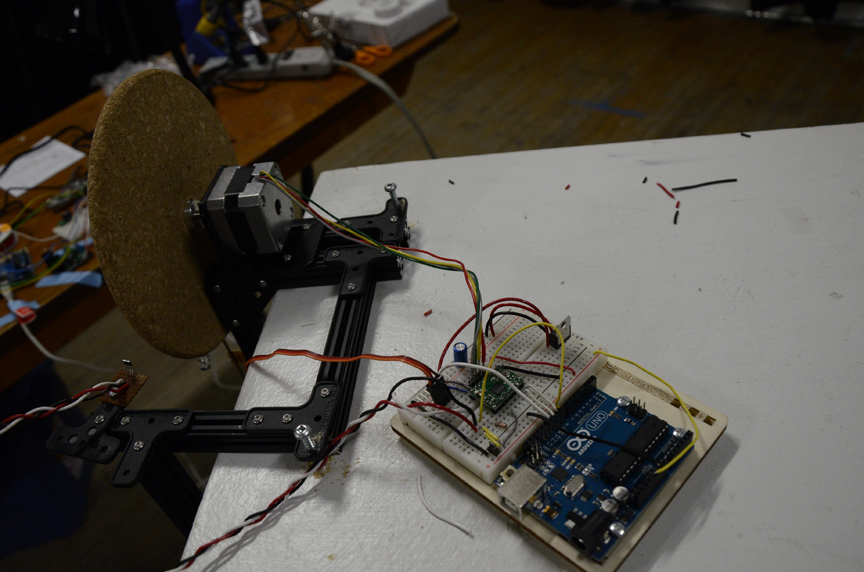 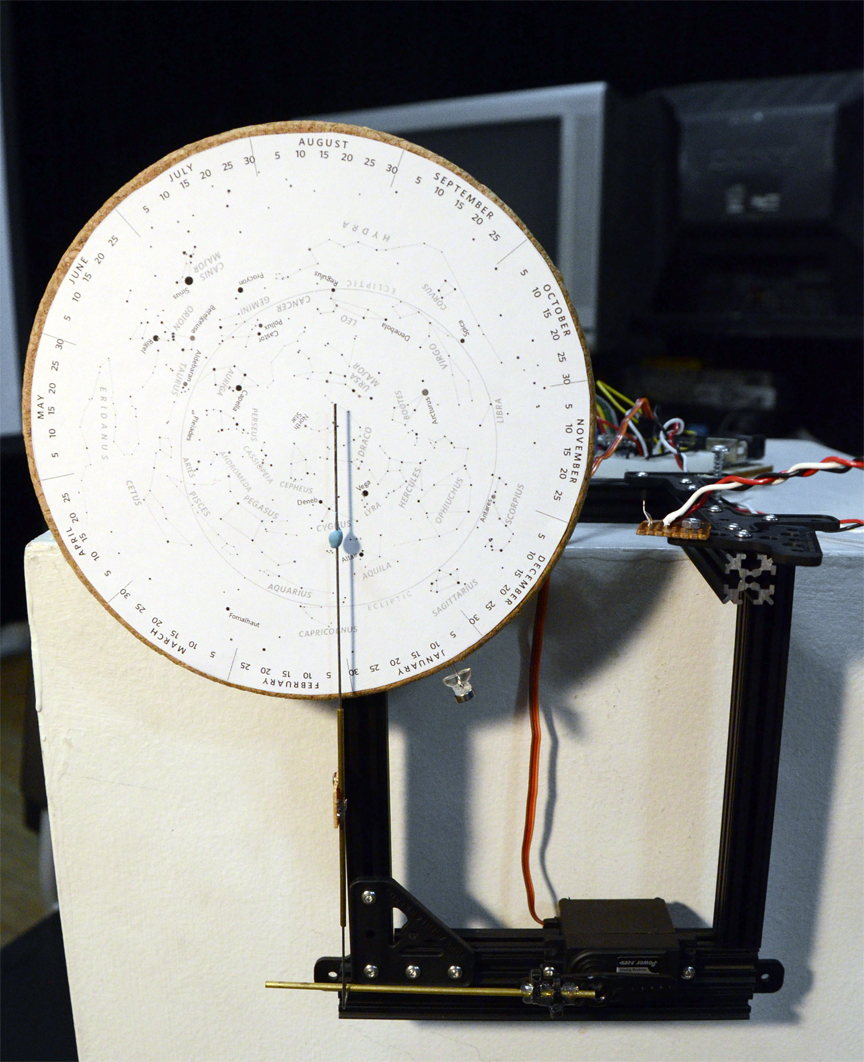 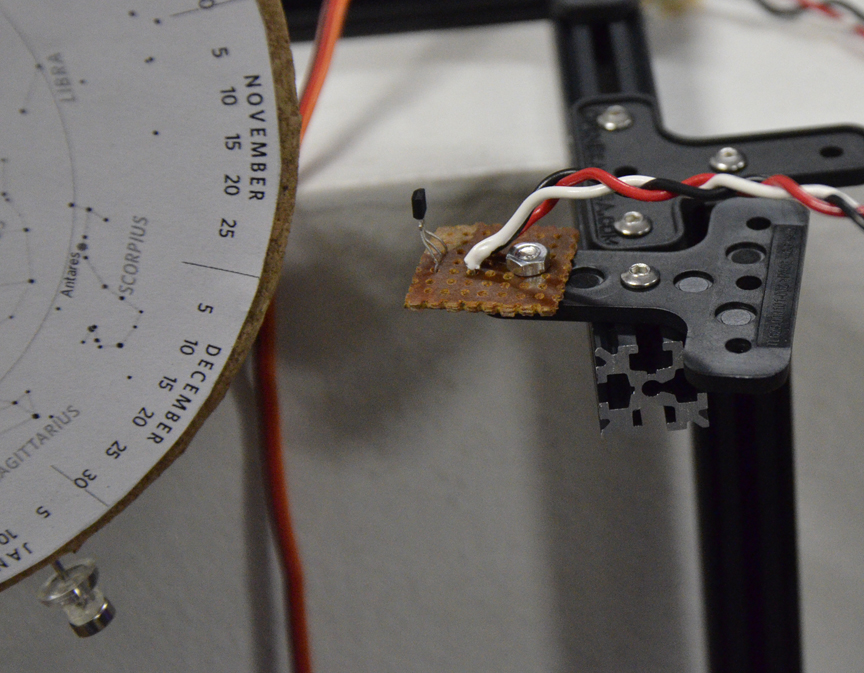 I am grappling with several layers of not knowing with this project. The programming language and application does not come easily, or at all, to me (Rob spent a good deal of time helping me to understand elements of the code, from prototypes to functions and definitions etc.). The way the electronics components work together sometimes clicks for me, most times not. I am mostly frustrated that I find it so difficult to visualize various cosmic motions as they are, as they are apparent from earth, and as I could possibly depict them in various ways through models and 2d renderings. I wasted several hours confusing the way RA and ecliptic longitude are variously named, meausured, converted from one set of units to another etc. Some of this is, admittedly, because I’m just burned out and not thinking clearly. The rest is part ditziness and part inadequacy, plain and simply.

Early in the week we saw the documentary Particle Fever, about several experimental and theoretical physicists getting CERN up and running. My week has been a combination of feeling incapable and knowing, re: CERN etc., that there is nothing I may/can/could discover about the basic laws of nature. Zero. Rien. The notion that most people are inadequate compared with mathematical geniuses has been a bit of a consolation…

On a sort of similar note, Barbara Balfour’s call for her 2014 UAAC panel session, Almost, But Not Quite: The Incomplete Artists’s Project, sounds fantastic and I will prepare a proposal to include my experience with this project. I would like to share my experience with this notion of the incomplete on a few levels: duration, importantly, but also with respect to practice, the practice of the artist, as distinct from the objects of an artist’s practice (process vs. finished works). Sometimes I feel my identity as an artist has less and less to do with finished works and more and more with processes of exploration and making.

So, this object Rob rigged up for me. We set up a table that has information for each year of my project, namely, the position of the planet at its nearest on the date of opposition. I am aware that Rob did some trigonometry with respect to the servo positioning itself in relation to the ecliptic (which is offset within the circle of the planisphere), but the servo does not yet consider the position of the planet. This will be dealt with as we begin to scale up. Eventually we will get the servo attached to an actuator of threaded rod to both control the motion more finely, and to translate the linear motion. The wheel is also having trouble with crossing zero – rather than going to a position using the nearest angular path, it goes the long way around. Again, can/will be dealt with moving forward.

Our visit to AssentWorks was pretty fantastic. The place has just about everything. Wood shop with various equipment and CNC machines. Metal working. Plasma cutter. Laser cutters for metal and non-metal. Several 3d printers for working with various plastics, combining materials, and the colour 3d printer that uses plaster. I signed up for the upcoming SolidWorks workshop to learn about CAD and whatnot. This past week I had a nice orientation with Marty, who has offered to prep a simple saturn 3d file (that zprinter is f’n fantastic) and took Jason’s workshop on the Epilog laser system. I am busy preparing files for cutting and burning into both wood and aluminum, which I think will be just gorgeous choices for my ecliptic/constellation renderings.

Speaking of the map projections. What a confusing experience this has been for me. It would help if I had a better grasp of the various ways that celestial coordinates are notated, and in this sense having a fully goto telescope has not helped me to understand how and where to find things in the sky. Without going in to too much embarrassing detail over how confused I was about plotting the position of the zodiacal stars and boundaries, and an appropriately curved ecliptic line (think, a plane cutting through a cylinder flattened out), and without re-living my basic introduction to map making (see http://xkcd.com/977/)…. I sorted it out. Chris V (thank you) sent me a table with the coordinates of the ecliptic, along with the formula for converting units; I sorted out, for real, that there are 15 degrees in an hour, I figured out how to read the constellation boundary coordinates provided by the IAU and plot the to my Illustrator file; and I put a cease and desist on Geremy who at my pleasure was fumbling through his attempts at same under my poor guidance. Geremy: graphs, coordinates, positions, plotting of. Getting closer….

Finally, Ken Gregory invited us for a backyard bbq on Friday and it was the only potentially clear night this entire week of Saturn opposition. I set up the CGEM and it was quite fabulous to participate in showing off the moon, mars, jupiter, and saturn to the various house guests, teenagers etc. Perfect backyard observing session, on the eve of both opposition and astronomy day. It took us a moment to realize that the heat from the fire pit was ruining the view of jupiter, so we covered the pit for a while and could easily make out two equatorial bands, plus three beautiful moons all lined up in a row. Saturn was lovely, so lovely, and I could also see some atmosphere, the ring shadow etc. Shooting video at prime makes for a very tiny planet, so this summer I will try to better use my barlows. In any event, one of the overexposed stills showed off some moons. 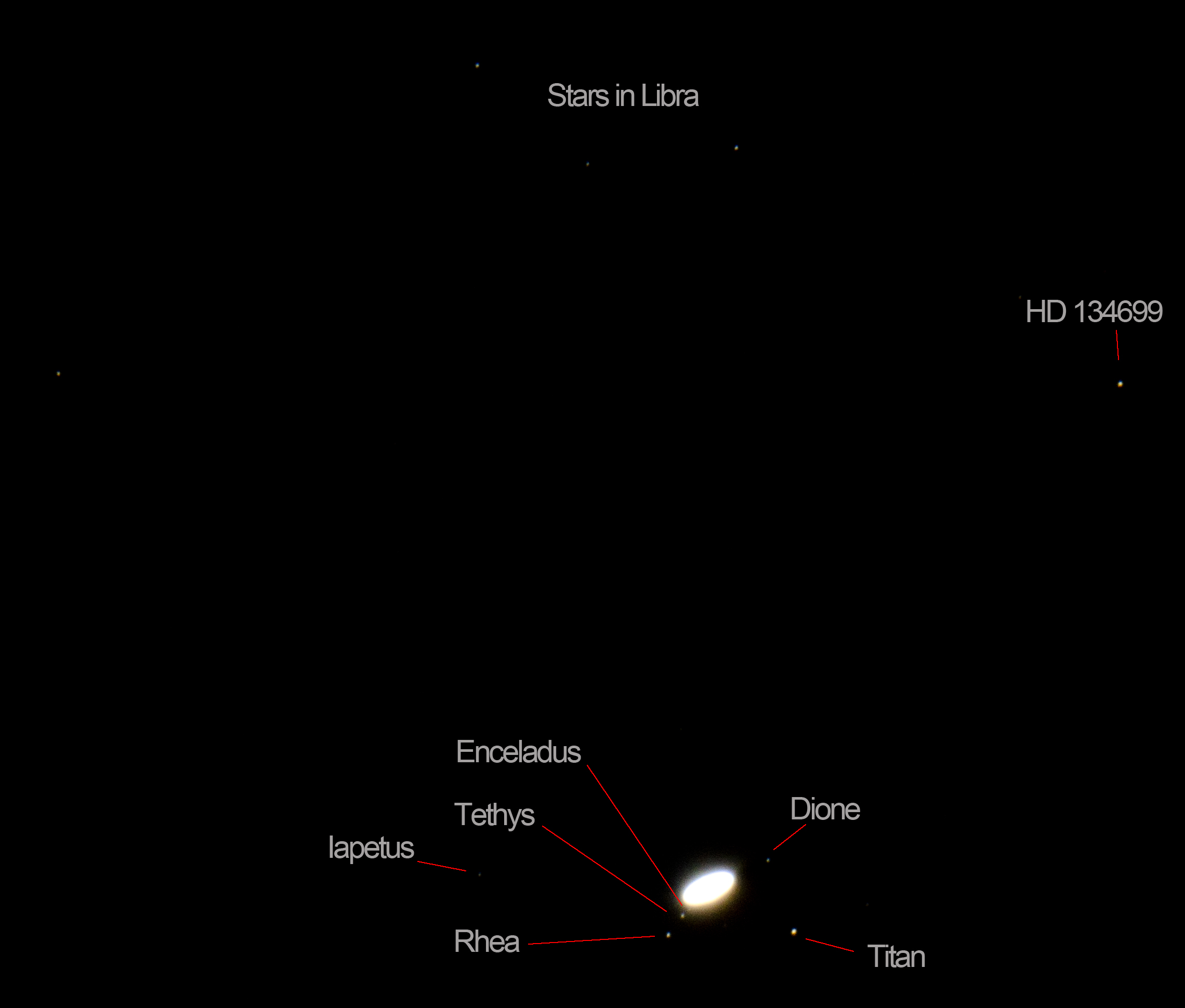 All in all this has been a fabulous week. I hope I can produce some wooden and aluminum planisphere pieces and ecliptic/zodiac pieces. I’d like to test shoot an aluminum wheel on the stepper/servo model, and maybe see how much the geared motor can move. I hope I can also explore ways of rigging for both rotation and linear motion – I sure wish I’d played with lego or models as a kid…

Thanks to everyone who has helped me out so far!

This entry was posted in Arduino, Uncategorized and tagged modelling views. Bookmark the permalink.