real-time-slow-motion (all night sun) – Out of Site

A bit late in the posting, but here is some documentation of my video real-time-slow-motion (all night sun), which Earl Miller curated as part of his Out of Site: Contemporary Art Works On Queen St. West in early October, 2015.

The Queen Mother Café was a most wonderful host, and it was really great to present such a simple and quiet piece on the night of the craziness that is Nuit Blanche in Toronto. I am grateful for the help of Dave Kemp and Jackson Smylie for installation, and for Earl for seeing what I see in this work.

Here are some images, and a bit of my adapted statement. 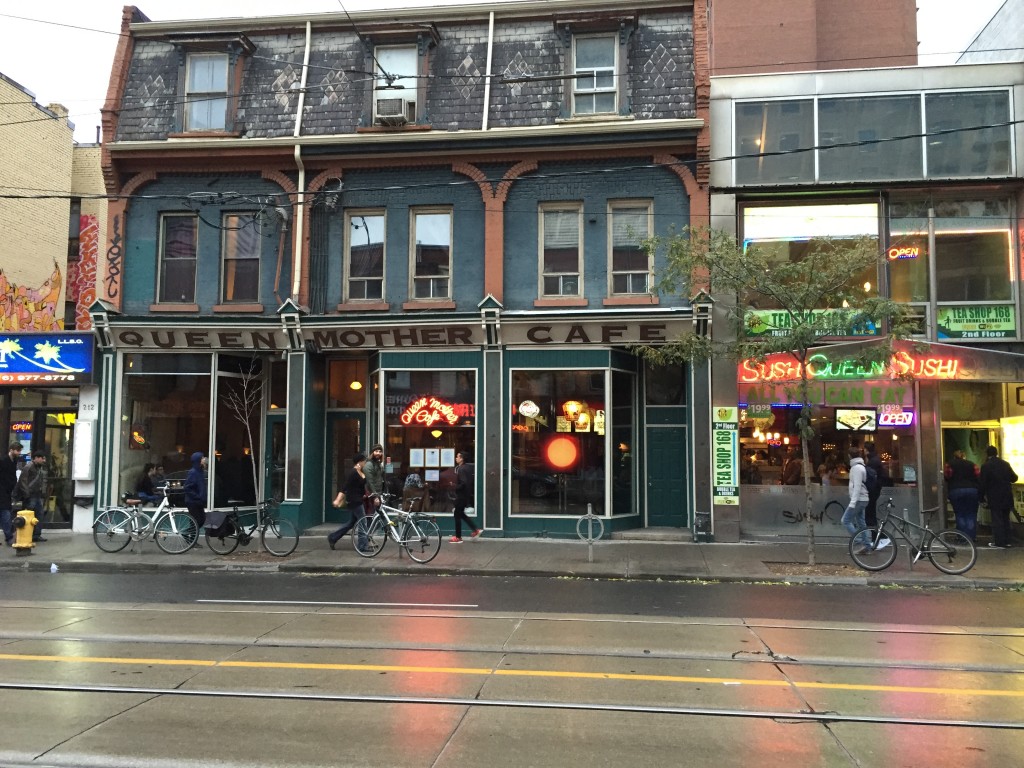 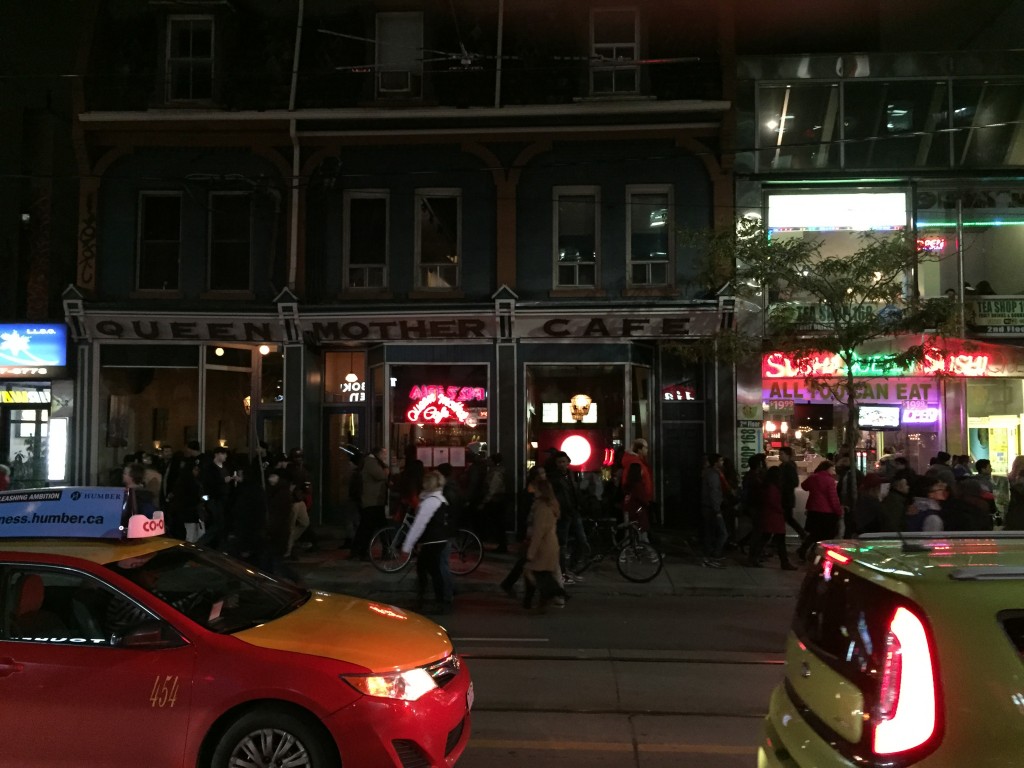 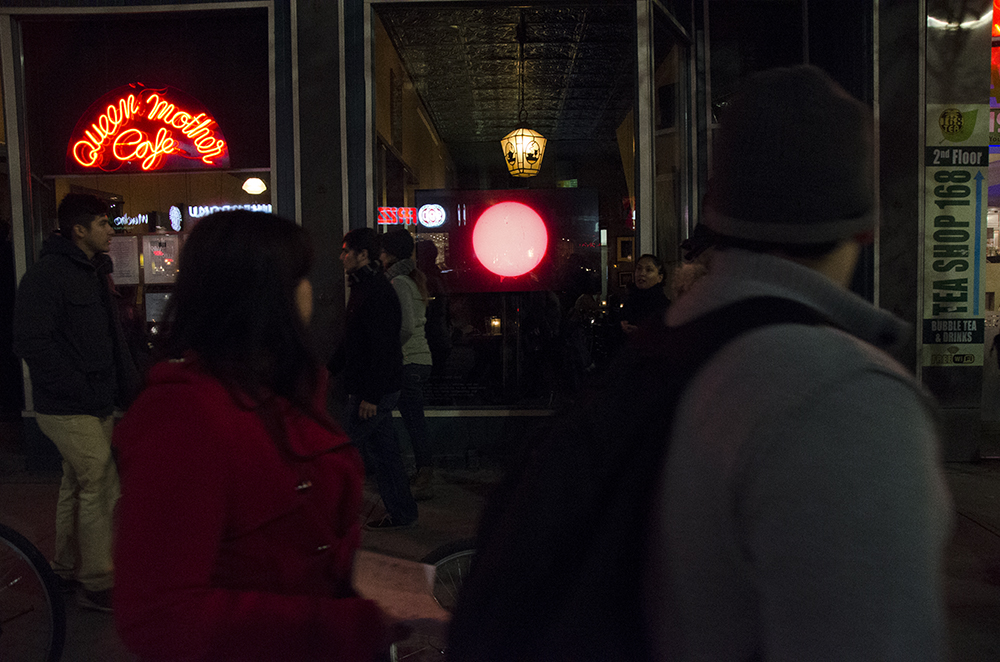 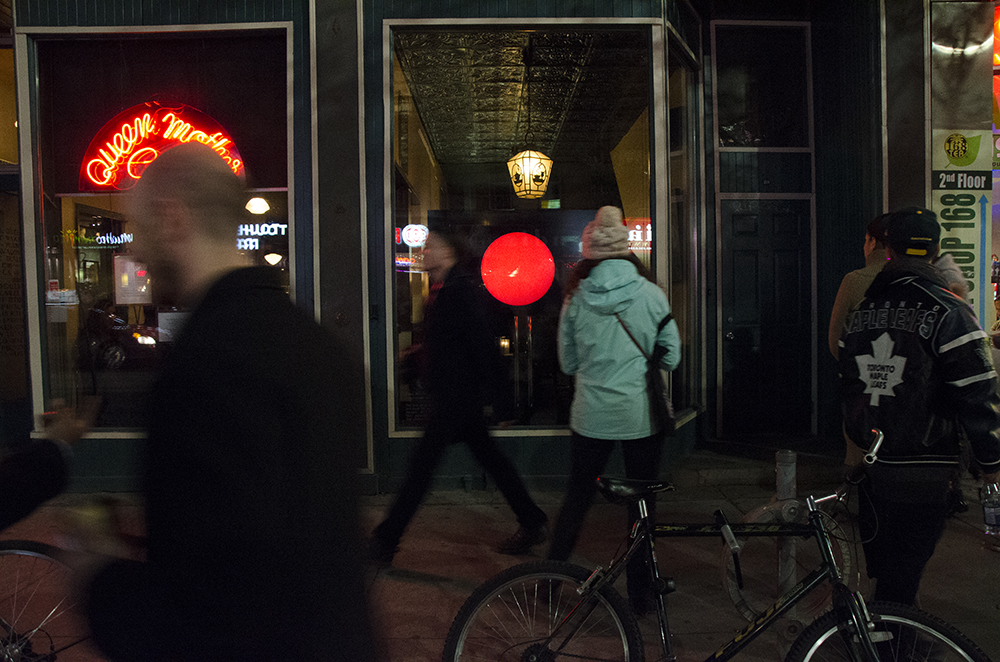 real-time-slow-motion (all night sun) is a 30-minute video loop of the sun, presented from sundown until sunrise in early October, 2015. The HD video was captured using a high-resolution digital camera back connected to a telescope using a hydrogen-alpha filter, which captures wavelengths of light that permit observation of sun spots and prominences. Video was captured during summer 2015 at the Carr Astronomical Observatory in Blue Mountain, Ontario, which is stewarded by the Royal Astronomical Society of Canada Toronto centre, of which I am a member.

The sun is a fire ball, violently active, and yet its pace is so slow as to be invisible to our unmediated senses. In the video the sun appear nearly unchanging. The cosmos is real-time-slow-motion.

I keep returning to On Kawara and his sensibility about being and/in time. He made date paintings for close to fifty years, subtitling each piece from 1966 until 1972, when there was a 34 year-long gap. At the end of that gap, in February 2006, his chosen subtitle, translated, was “To view the earth with cosmic consciousness.” This feels impossible, unthinkable, incomprehensible…and yet I want to try.

So much of my work has involved collecting and durational practices and I tend to shoot lengths of video that are presented un-edited. With Trio, I presented un-edited synchronized footage of my best performances of a Franz Schubert composition for piano, cello, and violin, after just 7 weeks of learning, and limited musical training). With Blurry Canada, I presented hundreds of hours of video that I captured during a road-trip across the country and back, on two monitors (eastbound and westbound). The un-cut loop runs 2-3 weeks long, depending on gallery hours. In other, 2-dimensional, works, the time taken to make the thing is at least loosely evident, like with my 10×10” cross-stitch piece of the largest Globular Cluster in the Milky Way, Omega Centauri.

These practices pay attention to real time and its presentation.