I have been remiss in posting to the Blog in the midst of my travel from Regina to Toronto for the summer months; it has been a busy time.

The Work Party at the CAO was a whirlwind of business and I was happy to contribute along with many volunteers in the maintenance and improvement of the site and facilities. For Toronto members on the list-serve, a photo album has been posted: http://groups.yahoo.com/group/rasctoronto/photos/album/1226186770/pic/list . We enjoyed some observing both Friday and Saturday nights, though I did not setup my scope. [update: both nights we observed the conjunction of Venus, Jupiter, and Mars].

I’ve been trying to look at various members’ logbooks to get a sense of how people track their observing sessions – and, basically, I need to find a way to keep better notes in the moment. I attended the final meeting of the First Night orientation for new members a the DDO where Les Bluestein presented on his astrosketching. Les makes meticulous notes and rough sketches which allow him to return to his drawing materials during the day time to refine and polish. This sounds like a good practice (for both the Blog, and any sketching I might do in observing Saturn). It was great to reconnect with the DDO folks that evening, to see the new Sky Lab, and get zombified at the bar later. This reminds me to write to Stu M. regarding the sketching workshops and events he is planning!

The CAO Open House was a lovely weekend. Blake N. and I carpooled (I enjoyed the defensive driving tips and demos en route) and several of us set up our tents on the lawn despite the thunder showers and periodic rain. That first evening we saw a spectacular double rainbow in the southeastern sky, with the main arc touching the horizon on both ends at moments. 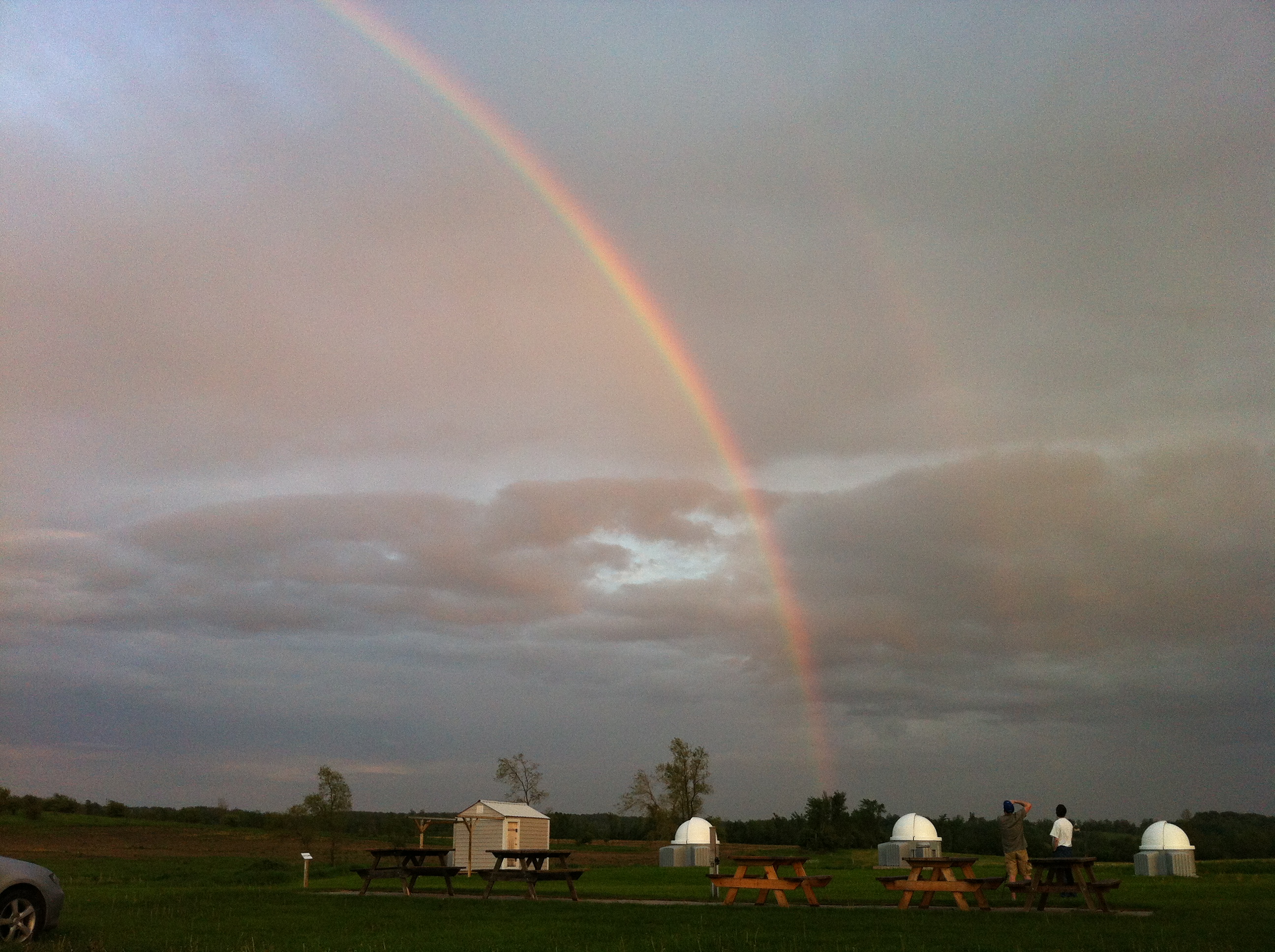 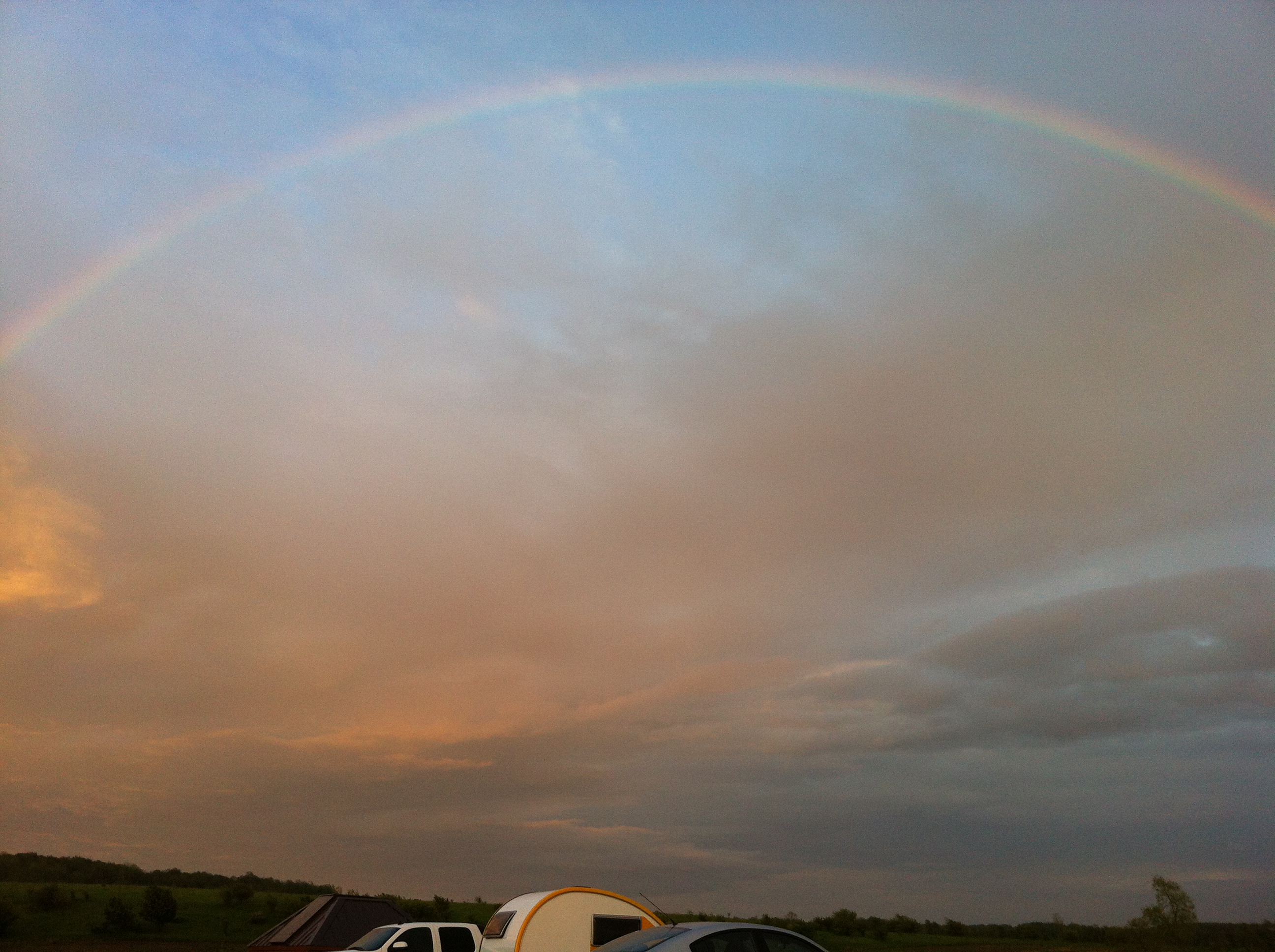 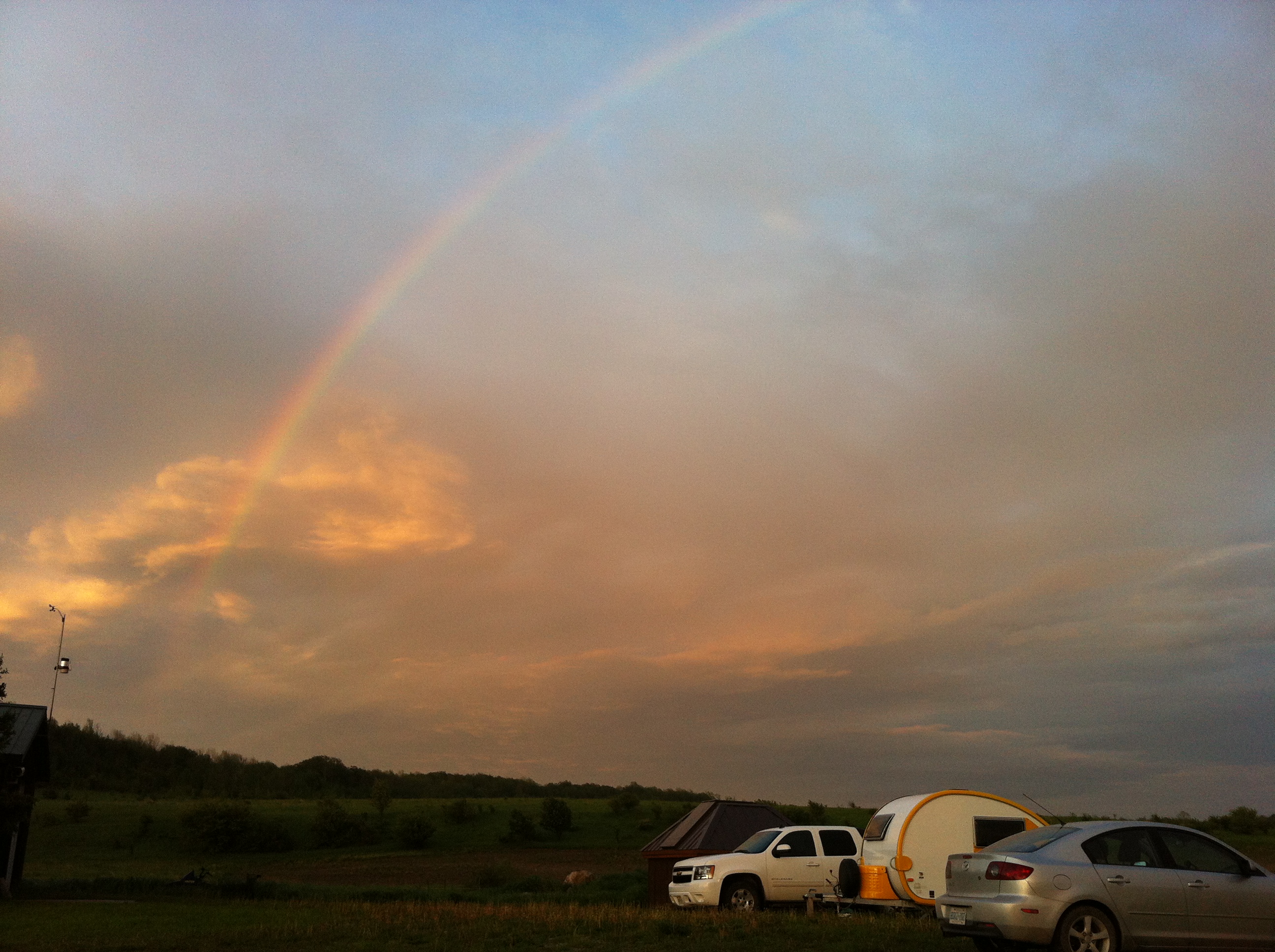 After dinner I relaxed in the living room until Blake sped through with the words “Sucker Holes!” and I realized that the GBO was open and observing was happening. Since I haven’t created a log book, I have no recollection of what we saw outside of Saturn, and that I missed mu Cephii (Garnet Star). At some point I had read Nicole M.’s fb post about the high chances for aurora sighting, but since I was still in the living room thinking we were totally clouded over I didn’t mention it. And then Blake powered along…”What’s that GLOW in the northern sky???”

The next few hours were spent by Blake, and Steve, and others photographing the aurora, which looked like a wide swath of brighter sky that transformed in long exposures into an awesome green glow. Steve made some fabulous time lapse videos that show some of the movement amidst the moody clouds, click his name, above, to see a sample. Thing learned: better train myself for night time observing; always pack all my gear no matter what, just in case….

The CAO is a really fabulous facility that is accessible to all RASC Toronto members for a nominal nightly/seasonal fee. The house is comfortable, the grounds are lovely, the astro facilities are great, the site supervisors are welcoming and super helpful, and the surrounding land is great (there’s a Bruce Trail hike that encircles the property). Again: for anyone looking for a bit of relief from the city under darker skies this is an amazing resource. Go to the CAO!!

What else?  Chris V. sent out a invitation to set up and observe behind Woodland Public School in Thornhill, and despite feeling tired and sunburned (Potager 2013 is growing!) I packed up my gear and headed over. I didn’t realize, actually, that these invites from Chris to the lists are run as public sessions so when I arrived I felt some extra pressure to setup and align my scope efficiently. I think I broke a record, 20-23 minutes, I’m guessing, from the moment all the gear was on the basketball court (thanks to Marcel and another member who helped me haul all that stuff up the big steps) to my “Who wants to see Saturn?” announcement. I really need to thank Mark, Phil C., and Blake N. again for their tips over the past month that have made my set up more efficient.

One thing I winged last night was that I didn’t wait until Ursa Major was visible. I’ve set up several times this past month so have a general sense of the orientation of the constellation at dusk. Polaris was clearly visible in the PFS so I just guessed at Ursa Major and the two-star alignment was just fine. I have a design idea for a PFS reticle: to simply etch three Ursa Majors with three corresponding Polaris circles – having just one Ursa Major etched means potentially having to spin the RA a far way to ensure the appropriate relative distance between it and the Polaris circle. Next time I’ll try to guess that relative distance and see what happens (since at this point I think I’m convinced that the RA need not be spun at all given the reticle can, when loose, be spun around and end up in an arbitrary position relative to the mount. If I’m wrong and still don’t get it someone should correct me!).

Last night at Woodland was my first public viewing session as a scope operator and I was tickled pink to have a line up. People oohed and ahhed and noted how much clearer was Saturn in my scope (even with the 40mm lens that shipped with the cgem, before Chris loaned me his 14mm, then 6mm). I am really looking forward to devoting more time to gathering imagery with my CCD astro cam and dSLR – Saturn looks awesome with this ring angle! I could make out a few moons and atmospheric banding but my favourite thing to look at these days is the ring shadow on the planet. It is such a slim dark line just above the rings, giving a beautiful bit of contrast. I’m really excited for the 2013 image, and Blake has offered to help me shop for a pc so that I can access a better range of stacking software…

I did manage to capture a couple of frames shooting video with my iPhone – the Cassini division is subtly apparent. 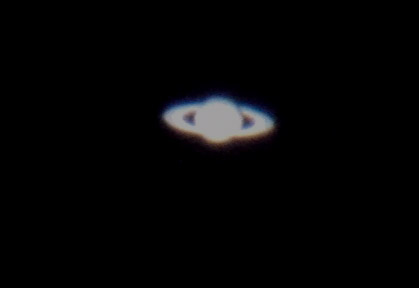 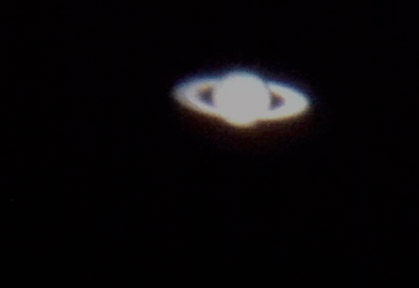 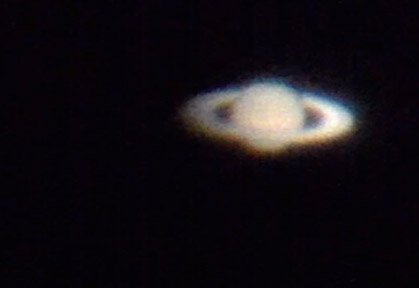 One final note: Blake and I saw a sweet painted turtle while getting ice cream on the drive back from the OHAP and I snapped a nice couple of shots as it voided itself before I carried it back to the stream at the edge of the parking lot… 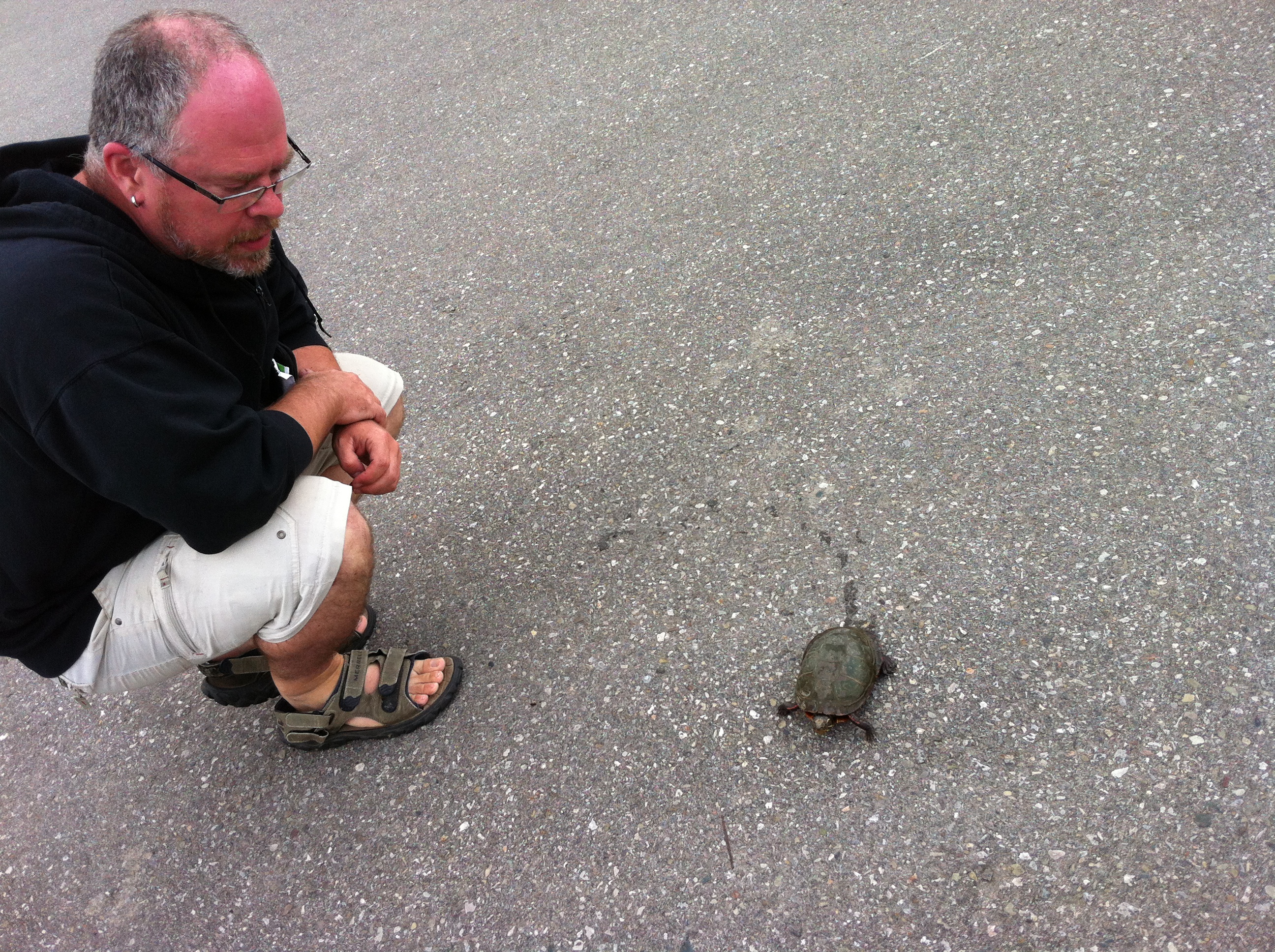 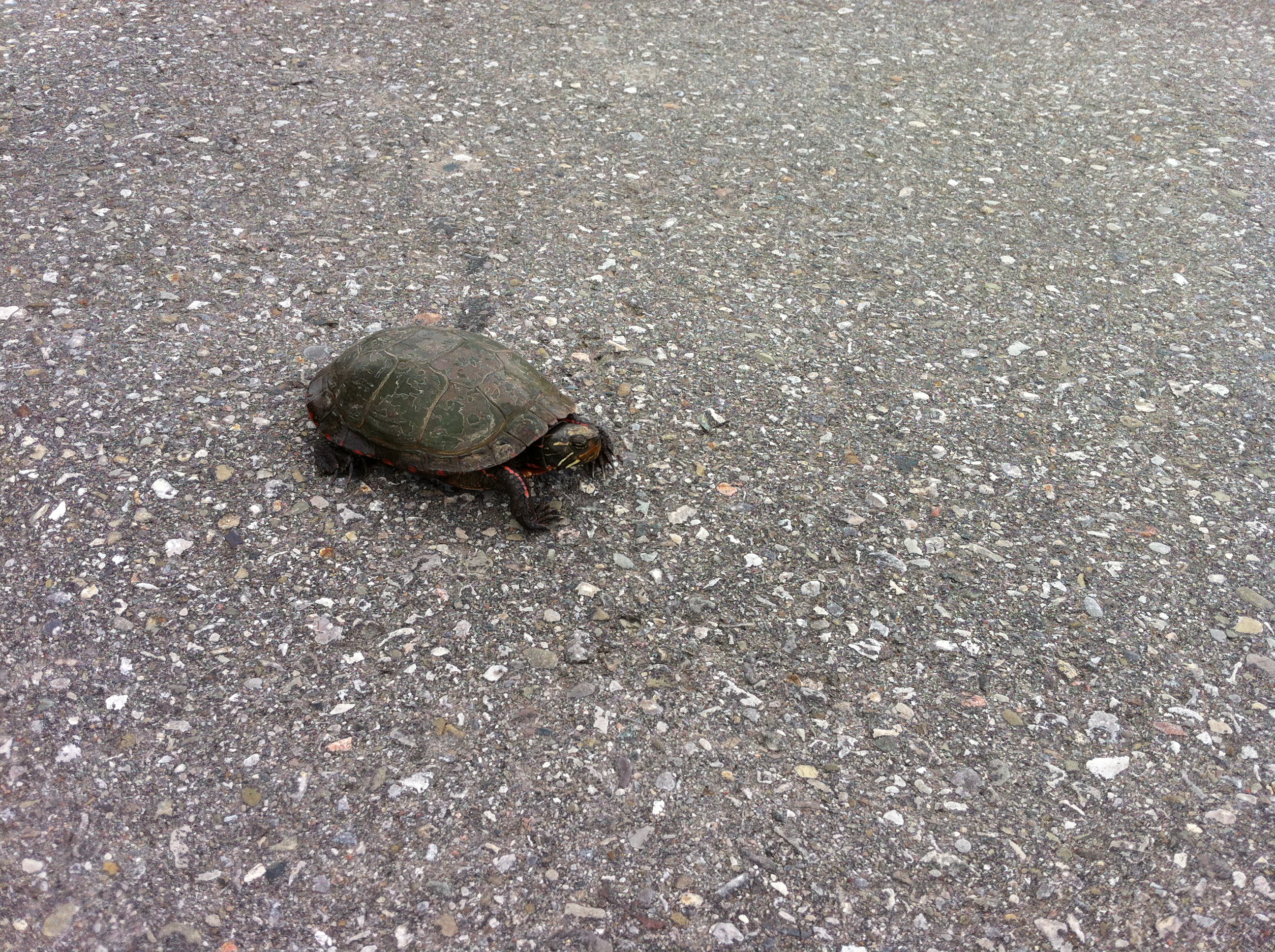