Fantastic first visit to the CAO for me in 2014.

The observing pad was full, and thanks to Blake, who basically has been carrying and setting up all my heavy gear because my back is out, I was able to use both my cgem and try my sky tracker on the night sky for the 2nd time (the first was my minor test on the balcony in regina, where I had to set it up 3 feet off the ground to sight polaris). I used the ac adaptor to power the scope, for the first time, and it worked perfectly (and had no heat when I unplugged it at 3am after 5 hours, v.good).

My plan was to look at a bunch of NGC and Messier objects in Virgo (just because: pick a part of the sky, explore it), while also trying to get a wide field shot of the teapot, the galaxy, and saturn. Turns out, all that business in Virgo isn’t that exciting (using Rob’s 15mm (which I will return!)), and (my lens’s field of view was not wide enough for the latter) (UPDATE: looking more closely at the image below, I did indeed get the teapot and saturn in the field of view. Working on the labelled image….)

I started with Vindematrix and confirmed I could make out the constellation naked eye (ditto with Sagittarius and Leo), then pointed at NGC 4698, but could not see anything. I also looked at M61 and M58, which was very small. Of course I got distracted. I figured out how to enter RA and Dec to goto an object, and to store an object in my HC database. I mounted the slr to my 8″, then focused on Dubhe (I thought Blake said Deneb, so the scope took a wee tour) and returned to my saved object (Panstarrs 2012 K1), and took some shots of the comet. Since the pad was so busy there was a lot of vibration, but I did manage to get at least this shot (nevermind that I forgot to record raw files, this is a native .jpg). 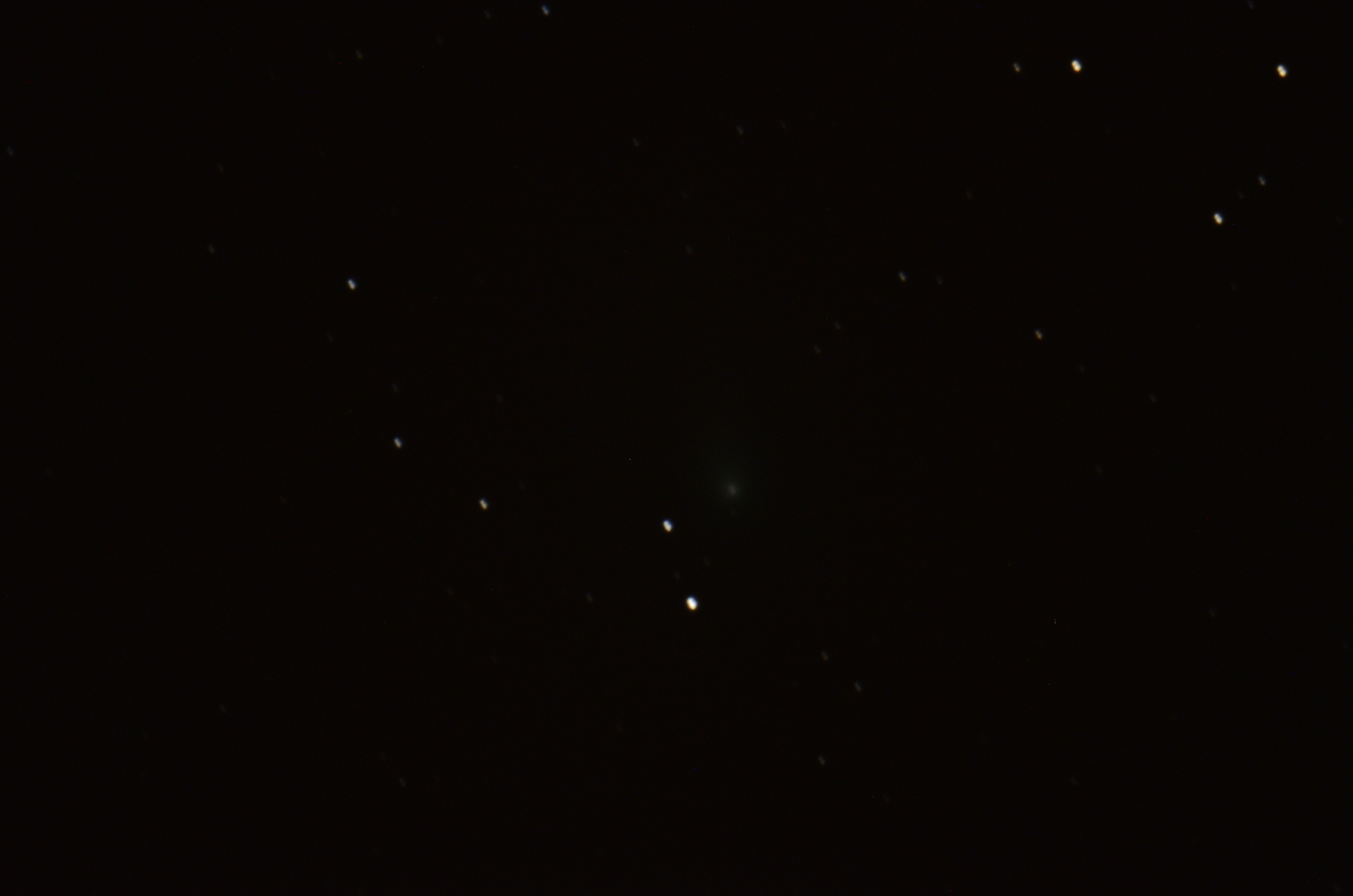 I shot some video of Saturn while I had the camera mounted ( I am collecting a lot of video for future processing), then returned to Virgo to look at some other objects before giving up on that business, getting a big 13mm ethos loaned from Steve along with Blake’s 2″ Williams Optics dialectric diagonal with adaptor for my 1.25″ mount. M101 was a smudge; M108 was a smudge; M97 was a nice soft schmear; M64, the Black Eye Galaxy, was a tiny schmear.

I did, with Steve’s help, confirm that my scope has developed backlash issues (Blake admonished me for storing the mount locked). I don’t know how to fix this. But I will have to find out eventually (maybe today, says Blake). (UPDATE: yes, we fixed this. Blake found this website, describing this as ‘slop’ or ‘binding’, and Steve’s description of backlash also applies. For record keeping, I tightened the Dec grubs (both) 1/4 turn, and loosened only one side of the RA 1 full rotation. 2mm and 5mm Allan keys. We physically felt a tighter grip in both directions, and slewed back and forth in both directions to listen, which lead to a modification of RA, which I’d tightened 1/4 turn at first. Now, no give/slop, everything sounds lovely. Steve time lapsed it all, maybe I’ll link up to that at some point.).

Finally, I confirmed that M13 is very pretty (and could be the next cross stitch piece, the first being Omega Centauri, which is not visible from Canada except, Blake imagines, from Pelee Island), and that M92, Hercules, is ok.

I hemmed and hawed with the sky tracker, then pushed myself and set it up. I took 5 wide field frames at ISO 800, for 5 minutes each, pointing south, but forgot a dark frame. Then I shot the summer triangle, and learned that when pointing straight up my camera lens will not hold its focus.

Below are two versions of the same image of the summer triangle (30s, iso 6400, because I forgot to reduce the iso after focusing): with one, I let the pshop raw processor automatically ‘correct’, and with the other, I manually adjusted various settings (click for larger versions). 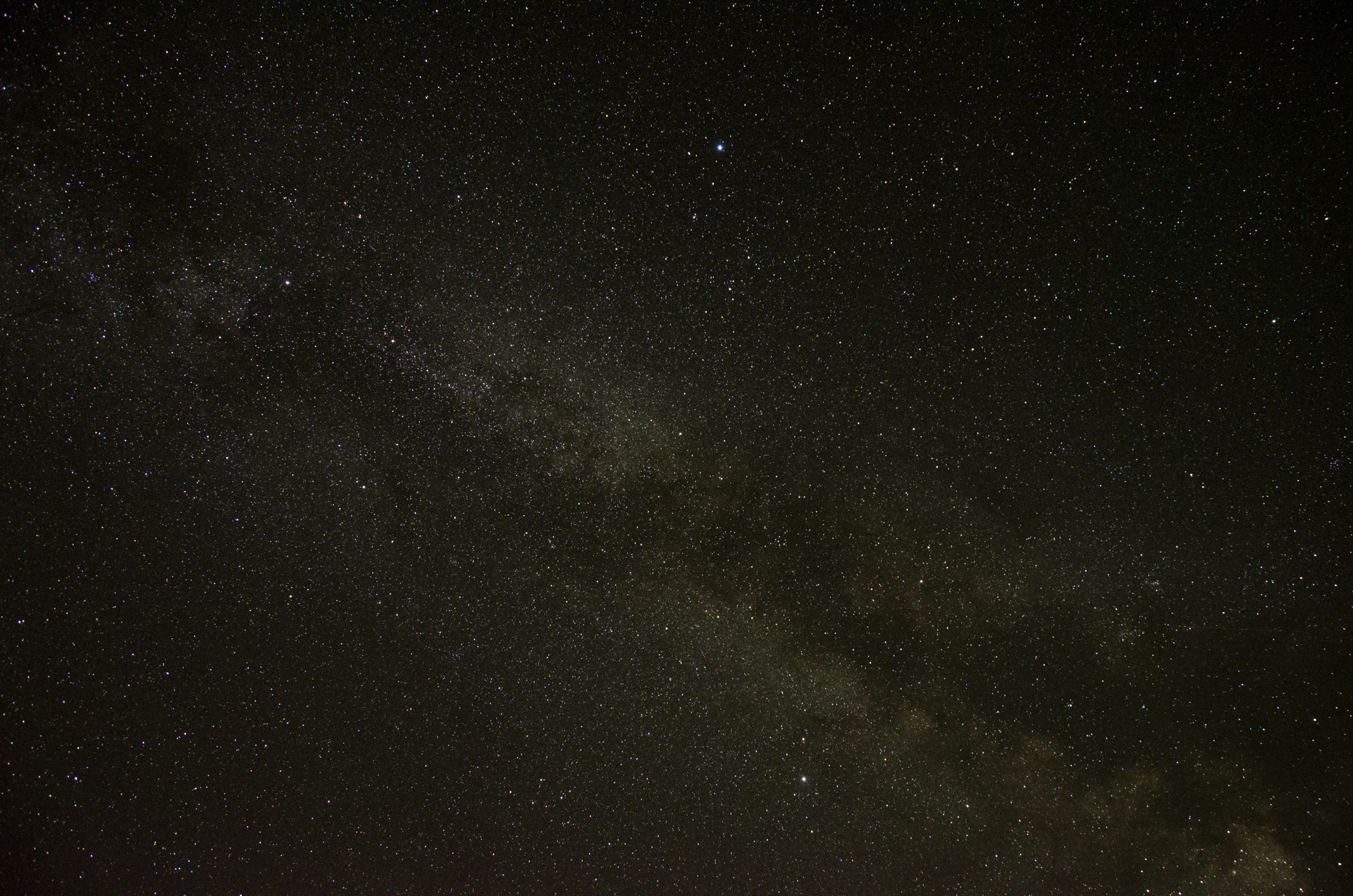 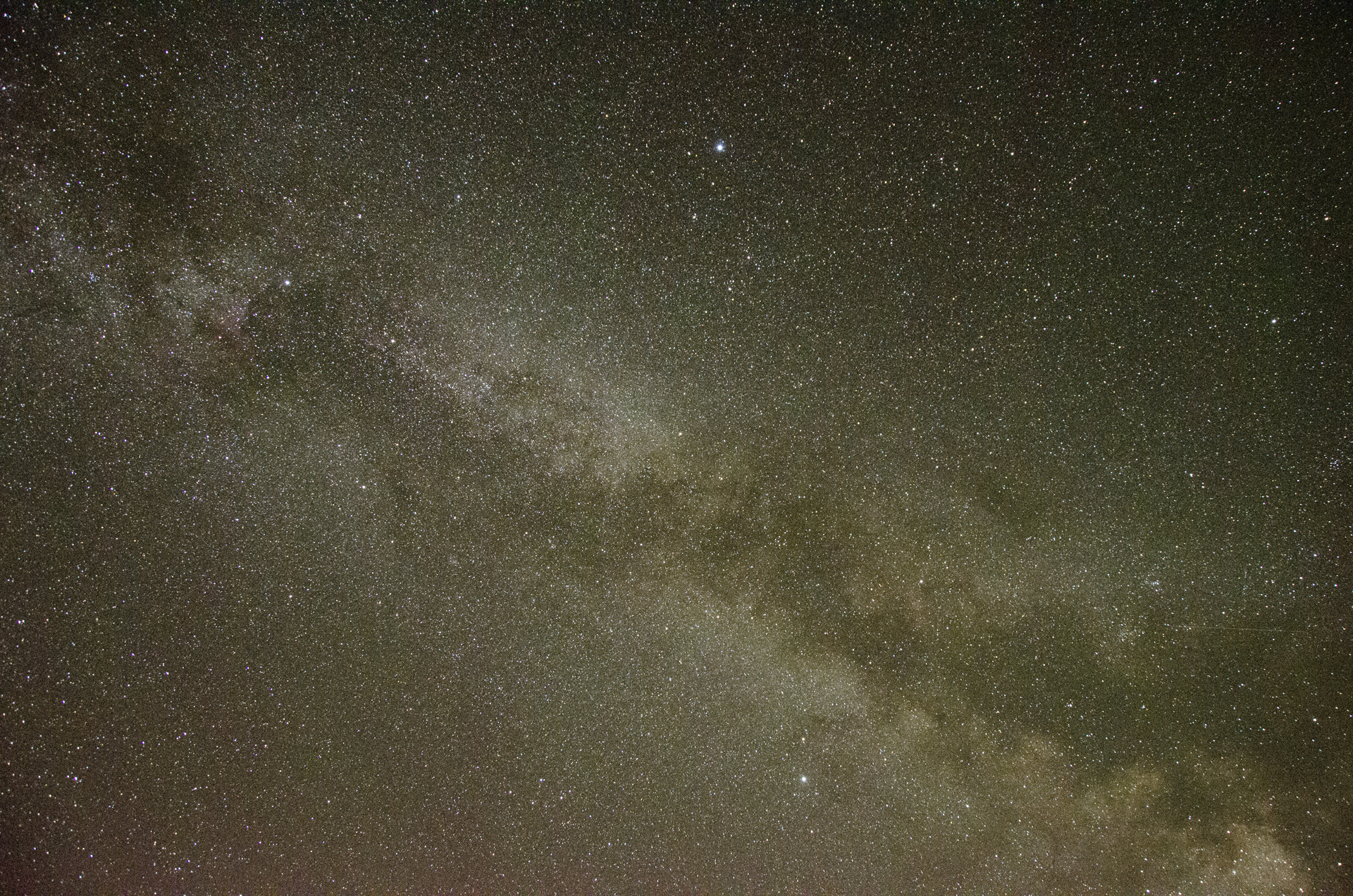 Below is a manual stack of 4 images, using photoshop and various layer opacity levels, some levels manipulation after flattening, along with some black point adjustments: 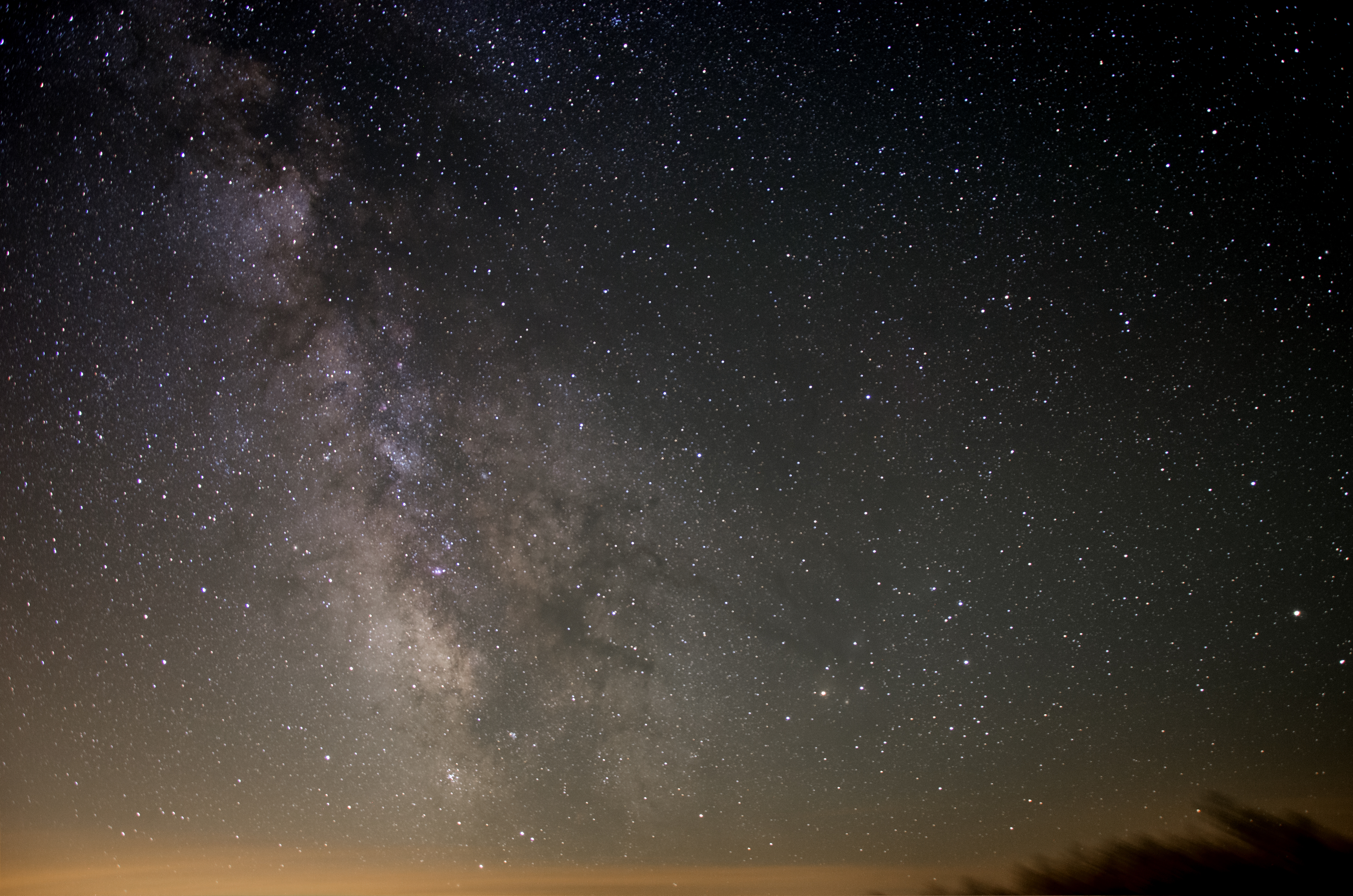 I’ll update this post with a labelled version of this image, which I need help with (I know that sagittarius, the teapot, scorpius etc. are all in there, I just can’t make them out because a) there are so many stars and b) I don’t know the sky well yet).

Finally, I was in the midst of deleting some accidental short exposure files (darned camera, if I go to live view it kicks me out of bulb and defaults to 30s, then I forget to reset), and remembered how much detail I was able to get out of those seemingly empty images of saturn a couple of years ago. Below is a really fascinating image, I think. ISO 1000, .6s, processed using the pshop raw editor to modify the exposure settings alone: and there is a no-noise very crisp image of sagittarius and scorpius which is the same composition/framing as the image above. Wild. 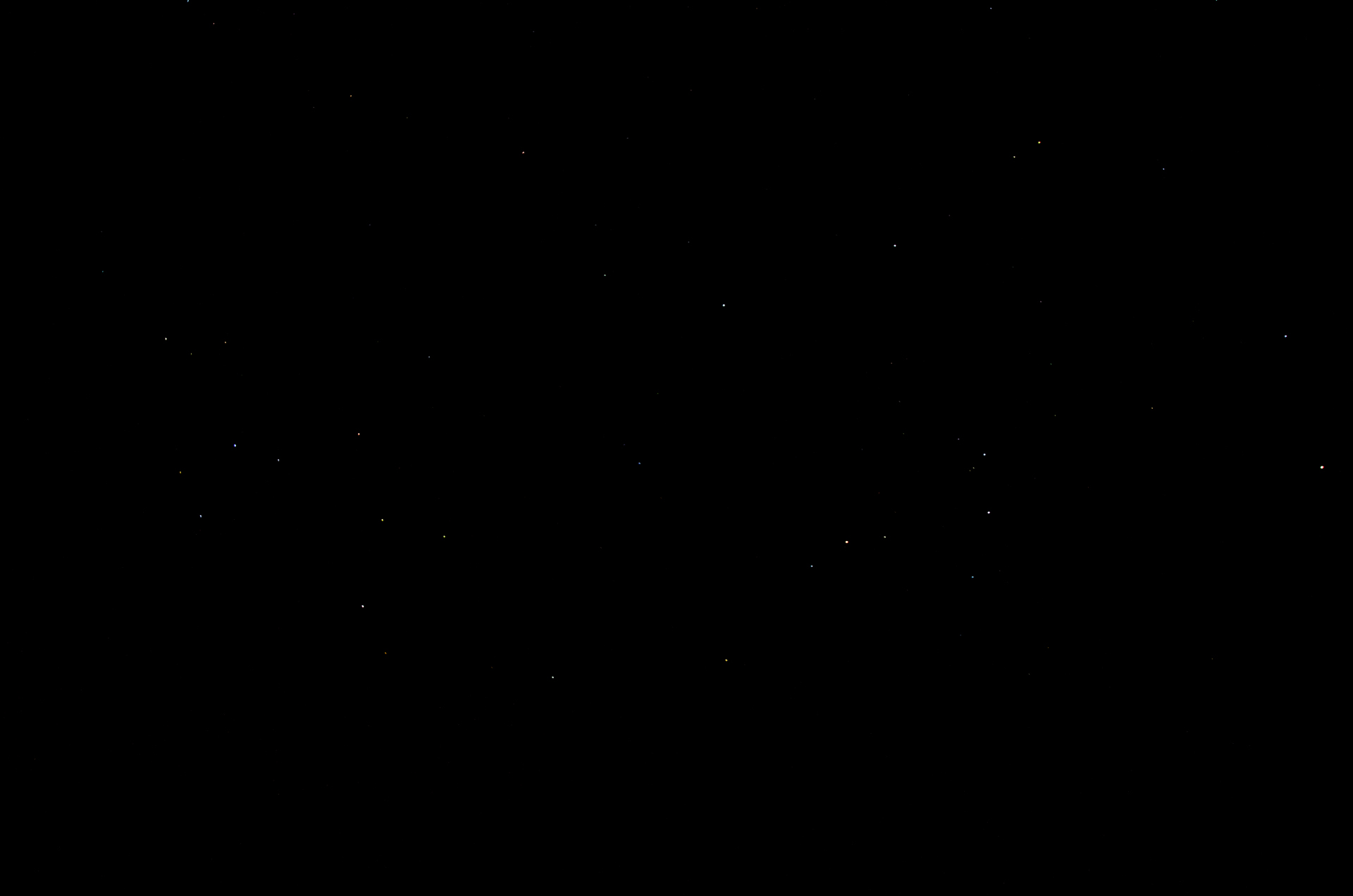 We are staying another night, and I think I would like to do a time lapse of Saturn over the course of time for part of the evening, while visually observing some other part of the sky. That’s it. May go for a wee hike around the Margaret Paul trail before going to town to find something to grill for dinner and some cola to go along with the rum Nicole left behind 🙂

UPDATE: this is as far as I got, with help from Tom, in labeling this image. So much more in there. 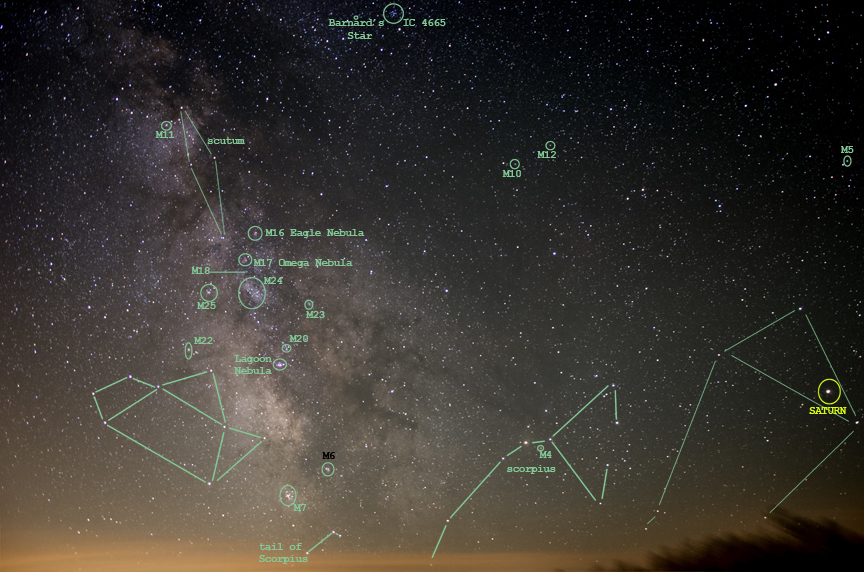