Well, I did it. I polar aligned my CGEM, and did a 2-star alignment successfully.

I put a shout out to the Regina RASC email list for joiners on Saturday night, April 27th, in honour of opposition on the 28th (who knows, I may have stayed out past midnight), and Mark offered to assist. Gail cooked us a nice dinner, and with the CSC (clear sky chart), and the sky itself looking grim (completely overcast), we did a ‘dry run’ in the parking lot of Gail’s condo.

Mark shared a few tips while watching me shuffle and haul. Reviewing the hand controller (HC) with someone who knows it was really helpful. I’m so used to using arrow buttons to select menu objects, but with the HC those are strictly for mount movement. I also noted that when running through the 2-star alignment routine, the HC automatically chooses an appropriate speed for each operation. I also noted that the imperative UP/RIGHT of finishing centering stars is not about the handset buttons, but about the mount movement, and depending on where the mount is on its axis, UP/RIGHT (i.e. finishing the movement against gravity) might not be the up/right buttons on the HC.

Mark was watching the direction of a clearing in the clouds on the southwestern horizon close to dusk, and we decided to go to garbage hill to set up in full just in case it cleared enough to sight Polaris and attempt a real run through.

The wind was, gratefully, not strong up there as I assembled everything in full, including the ankle weight for mount balance (I got close, but need a better system than velcro wrapped around the end of the tube), and realized I still hadn’t aligned the darned finder scope. I’m not sure why I didn’t think of loosening both RA and DEC together, to have better control over moving the scope freely to an object for aligning the finder, but Mark showed me and I used a nice red light on top of a building across from the bird sanctuary. I learned that my illuminated cross-hairs eyepiece is defective, so will need to exchange it: I used the 40mm that the scope came with.

By the time I looked up, I could see Polaris and a sky full of other objects. While I knew the seeing would be terrible (from both the CSC and Vance’s encouragement) I was so happy that the clouds cleared enough for me to find out, for real, if I’d figured out how to polar align.

I jumped for joy I was so excited that I did it. Those key steps – moving the RA to match the general orientation of the Big Dipper in the eyepiece with the same in the sky, then returning RA to home – made it so easy. Seriously. It helped that I had Mark shining a red light down the borehole (more awkward to reach it alone).

The 2-star alignment routine went well. I chose only one calibration star (I wanted to see how close the slews were with only one), and everything slewed within the field of view. Of course, as has been and will continue to be, it will be much more difficult for me to run this routine alone since I don’t yet know the sky well. As I was scrolling through the list of alignment and calibration stars, Mark was using my green laser to identify them to me, sometimes consulting with his mobile app. On my own, I will have one hand on my mobile app, the other on my green laser, and another on the HC. I think, though, after a summer at the DDO (at least weekly, I am hoping), I’ll become used to what is visible when, from that location, so the setup will become quicker over time.

Another annoyance is that when pointing the green laser directly at a star, and looking through the eyepiece, the laser tends to cut across the glass in a weird way – it is hard sometimes to find exactly what it is pointing at. Not sure how to make the laser more helpful on my own, will find out.

All this leads me to share that I was very happy to see Saturn around opposition in 2013, with my own scope, under my own labour. I looked with both the 40mm and the 24mm hyp. It bounced around through the atmosphere endlessly, with brief teasing glimmers of sharpness the revealed the gap inside the C ring (what’s that gap called, anyway?). We slewed to Jupiter and it was a blurry mess, but with both Jupiter and Saturn we saw some moons.

The wind picked up but I was determined to slow down just long enough to stand for more than a few seconds at the eyepiece with Saturn. It doesn’t take much, a couple of minutes, to let the looking carry away the imagination. It is out there. It is real. It is so close, and so far away, and not a fraction of it. I deliberately left my cameras at home but couldn’t help this one, below. iPhone, projection, 24mm hyp, CGEM 800HD: 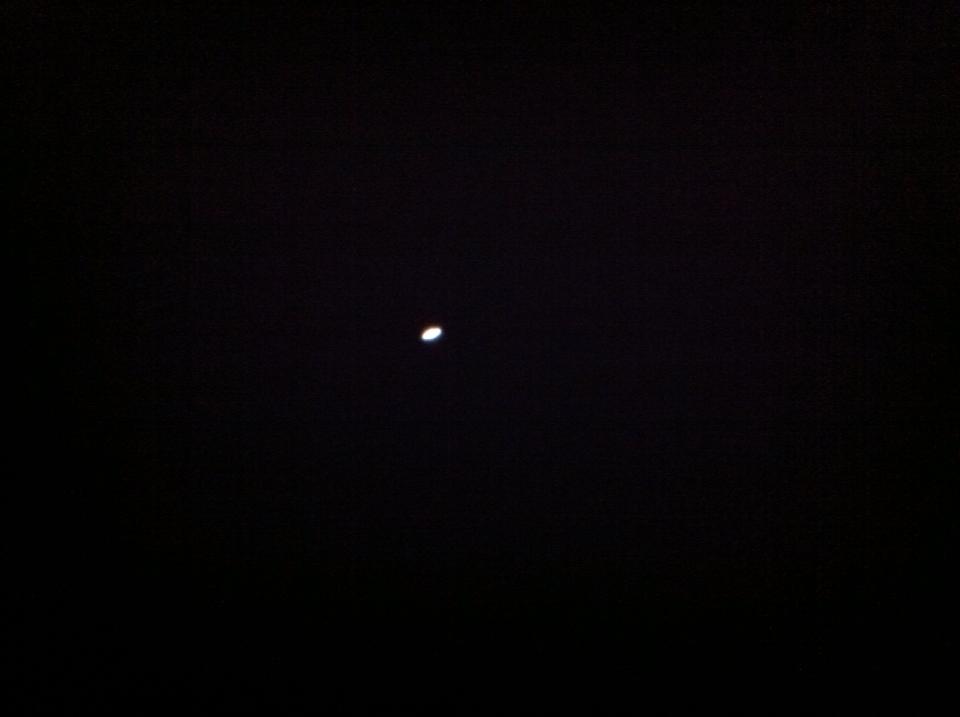 This entry was posted in Images of Saturn, Observing. Bookmark the permalink.

One Response to Opposition 2013 – CGEM success!